After protracted negotiations, Congress passed the American Taxpayer Relief Act late on January 1. The bill contains $620 billion in tax increases (compared to the 2012 tax laws), but little in the way of spending cuts. As a result, deficit spending will actually rise in 2013, mainly due to built-in increases in entitlement programs.

As predicted, most of the tax increases will fall on high income doctors. A summary of the key provisions are as follows: 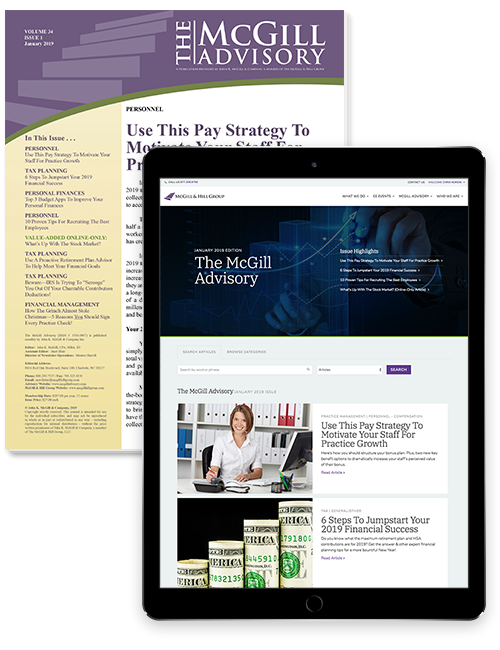 Not Yet a Member?

Join The McGill Advisory with a money-back guarantee

Your 45-day free trial entitles you to an 8-page monthly newsletter, plus unlimited online 24/7 access to hundreds of tax reduction, practice management, wealth protection, and retirement planning solutions. No obligation, no credit card.

The McGill Advisory content Is provided For informational purposes only And does Not constitute legal, accounting, Or other professional advice.

Time For Some Tax-Deductible Fun!

Sign Up for Free Email – Expert Advice to Your Inbox

Increase your profitability and personal wealth with timely tips & advice—hand-picked specifically for dentists and specialists by our top advisors.

Note: If you have an account, you'll be directed to your Profile to update your Email Preferences.

Thank You for Signing Up for Email News

Your resource is unlocked. View it now or create a free online account and refine your email preferences.

Sign up
Copyright © 2022 The McGill & Hill Group LLC. All rights reserved.
DISCLAIMER: The information presented on or through this website is made available solely for general information purposes.