How To Maximize Tax Avoidance In Group Practices

This is a Free Article

No obligation, no credit card.

While most doctors still practice solo, a growing number (over 30%) now operate in group practices of two or more doctors. While the tax saving strategies we recommend apply to all doctors, group practices typically employ significantly less tax avoidance than do solo practices. That’s usually due to concerns about fairness among partners (shareholders), and ignorance about methods to optimize tax avoidance, says Blake W. Hassan, a CPA and tax attorney with McGill and Hassan, P.A.*

Hassan says that in group practices where the partners cannot agree on a uniform amount of retirement plan contributions and professional expenses (perks) paid for each partner, they usually minimize or eliminate the use of these tax avoidance tools. As a result, all partners are essentially penalized by overpaying their taxes and underfunding their retirement plans.

Hassan says that other group practices may obtain slightly better tax results using a “lowest common denominator” approach. Here, the practice funds the same practice-paid retirement contribution and level of professional expenses for each doctor, usually equal to the lowest contribution requested by any doctor/partner. While that’s preferable to no tax avoidance at all, it still means that the doctors are overpaying their taxes. 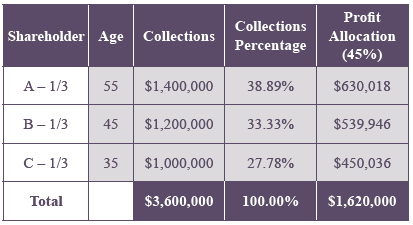 In this example, the three doctors are equal shareholders in a Subchapter S corporation, who are splitting their profits based upon each doctor’s respective share of the total practice collections. After paying normal overhead expenses, the practice generates a 45% profit percentage before taking into account salaries, bonuses, retirement plan contributions, professional expenses, and dividend distributions made on behalf of each doctor-shareholder. The resulting practice profits ($1,620,000 on $3,600,000 of collections) are allocated among the shareholders, as shown.

Hassan says that each shareholder’s share of the profit allocation can be tax-optimized as summarized in the following chart.

Subchapter S corporation dividends provide added complexity for group practices, since the dividend must be allocated based on the stock ownership percentages, regardless of the doctor’s profit allocation, says Hassan. He recommends that the shareholders agree at the beginning of each year on the total amount of practice profits which will be paid out as Subchapter S dividends, and allocated based on stock ownership. In the example below, the shareholders agreed that $300,000 would be distributed as Subchapter S dividends, with $100,000 allocated to each of the equal shareholders.

Next, the shareholders must determine the amount of salary they wish to draw throughout the year. The salary draw amounts must be determined by each shareholder based upon their personal spending needs and their historical practice profit allocation. In this example, Dr. A, age 55, will draw $295,000 of his practice profit as salary, while Dr. B, age 45, draws $275,000, and Dr. C, age 35, draws $255,000.

Most group practice doctors assume that while 401(k) salary deferral amounts may vary among partners, practice-paid retirement plan contributions must be made on the same percentage of pay basis for each partner. That’s not always the case, says Bryan Jacobson, President of PenSys, Inc.** “While the ability of doctors to vary 401(k) salary deferral amounts is well-known, the practice may be able to vary the practice-paid contributions on behalf of each partner if the doctors (as a group) have some age advantage relative to the staff as a group,” he says. Through using a 401(k) cross-tested profit sharing plan, employees can be placed in separate classifications allowing contribution rates to vary for each doctor, while managing staff funding costs.

Doctors can use a similar approach with defined benefit pension plans to achieve even higher annual tax-deductible contributions. These plans are established using a desired accumulation goal at normal retirement age (NRA), says Jacobson. Annual contributions are determined actuarially to achieve the desired accumulation goal at retirement, and such funding amounts are not limited by the contribution limits applicable to defined contribution plans, says Jacobson. Accordingly, doctors, age 50 or older, can easily double or triple their allowable tax-deductible contributions through utilizing a defined benefit pension plan.

Jacobson says that in a typical “tiered” or cash balance defined benefit plan, each partner may be placed in a separate class with varying contribution rates based upon their desired funding goals. Required staff contributions are based on the amount necessary to achieve comparability with the doctor funding levels, considered as a group.

We recommend that the corporation (not the doctors) pay all professional expenses (perks) for the doctors for maximum tax advantage. These include auto expenses (including maintenance, repairs, lease and ownership costs), continuing education, dues and subscriptions, travel, meals and entertainment, and health and disability insurance coverages.

Hassan recommends that these expenditures be tracked on a doctor-by-doctor basis using a “side sheet”, or with a separate QuickBooks subcategory for each doctor. In this example, Dr. B had $65,000 of professional expenses annually, while Dr. A had $55,000, and Dr. C spent only $35,000.

Once the above items have been deducted against each partner’s share of his profit, it’s easy to determine the remaining profit due to each partner at year-end. Hassan says that this amount is typically paid out as a bonus to each doctor in order to clear out the profit allocation accounts.

Your 30-day free trial entitles you to an 8-page monthly newsletter, plus unlimited online 24/7 access to hundreds of tax reduction, practice management, wealth protection, and retirement planning solutions. No obligation, no credit card.

The McGill Advisory content is provided for informational purposes only and does not constitute legal, accounting, or other professional advice.

Keep Practice and Office Building Ownership Equal among All Partners

6 Steps To Avoid A Partnership Failure

What Should it Mean to be a Partner?

Sign Up
Copyright © 2021 The McGill & Hill Group LLC. All rights reserved.
DISCLAIMER: The information presented on or through this website is made available solely for general information purposes.